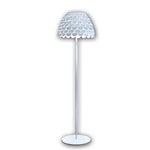 The Spanish Influence and Italian response

Fontana Arte Carmen floor lamp is a tremendous design created by Hector Serrano, and realized by Fontana Arte, an Italian company. Hector Serrano took his first designing steps in his hometown Valencia, where he studied design. Later on, he moved to London, where he found inspiration for many a designer works, including this one, released in 2011.

Fontana Arte Carmen floor lamp comes from the collection of Fontana Arte Carmen lamps which are all inspired by the medieval armors. These armors often consisted of a chainmail, which inspired Hector Serrano to create lamps in a similar pattern. However, in spite of the background and inspiration which is pretty much masculine, the lamp itself in very elegant, and one may say, even feminine!

The Light to read under

This floor lamp was especially made for indoors use, as it is specified by the designer, Hector Serrano, and Fontana Arte, and the most common places which you can use this lamp in are libraries, bedrooms, living rooms – virtually anywhere that you might want some light under which you can read. Its elegance and subtlety will go along just fine with any kind of furniture, and the light which escapes from under this lamp in different ways will decorate your room all by itself.

Fontana Arte Carmen floor lamp is quite tall, 178cm to be precise. The diameter of the lamp is 51cm, and it will shed enough light with both its direct beam and dimmer lights. The diffuser is done with white gloss finish, whereas the concrete base holds the metal stem with white gloss finish. Lower diffuser disc is in frosted methacrylate.